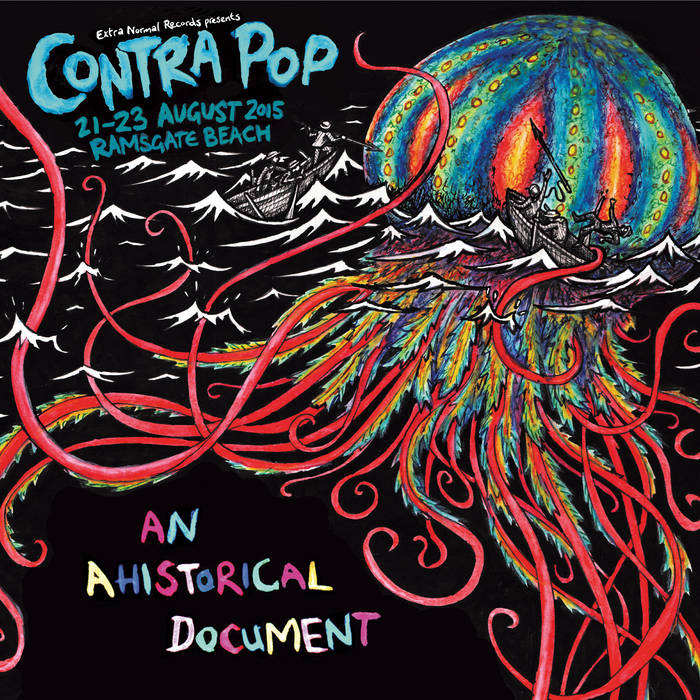 CD1
Track 1 composed, performed and recorded by Tomaga during winter 2013–14 in Hackney, London, and released by Hands in the Dark as part of Futura Grotesk (HITD 023) LP in November 2014.
Tracks 2, 3, 4, 5, 6, 8 and 10 recorded live at Contra Pop Festival, Ramsgate, 21–23 August 2015, by Dynamic Production Solutions and Extra Normal Records.
Tracks 2, 3, 4, 5, 6, 7, 8 and 10 mastered by Lawrie at Curve Pusher in June 2016.
Track 3 edited and embellished by Matt Wright in May 2016 (studio version co-composed by Evan Parker and Matt Wright, recorded in Broadstairs and Canterbury between 2008 and 2011 and released by psi in April 2011).
(Studio version of track 5, by Richard Dawson, recorded in Byker, Newcastle, in April 2014 and released by Weird World Record Co. as part of Nothing Important (WEIRD048) LP in November 2014. Published by Domino Publishing Co. Ltd.)
(Studio version of track 6, by Richard Youngs, recorded in Glasgow in 2006 and released by Jagjaguwar as part of Autumn Response (JAG121) LP in November 2007.)
Track 7, by Ghédalia Tazartès, 2016, previously unreleased.
Track 9, by Trelawney, recorded by Margo Broom at the Combination Of studio in Tottenham, London, and released as part of Beast of the Black Heath EP in January 2012.
(Studio version of track 10, by Ravioli Me Away, recorded in Rayleigh, Essex, and due for release by Upset! The Rhythm in 2016 as part of Living is a Myth LP.)
Track 11, by Pega Monstro, produced by Leonardo Bindilatti and released by Upset! The Rhythm as part of Alfarroba (UTR072) LP in July 2015.
Track 12, by Gnod, recorded by Gnod/Sam Weaver at Islington Mill,
Salford, and released by Rocket Recordings as part of
Infinity Machines (LAUNCH072) LP in April 2015.

Artwork by Oliver Barrett, design by Dan Dizette, manufactured in the EU by Key Production in 2016.
Copyright, if any, resides with the artists and/or their respective labels/representatives.